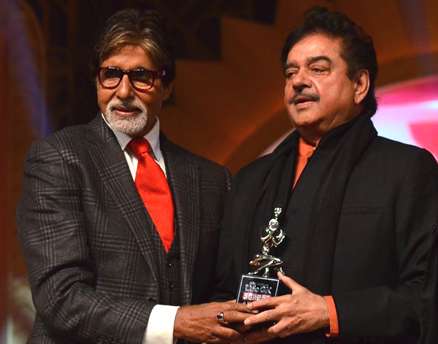 Come the 26th of April, The TATA Motors IIFA Awards powered by LAVA Mobile will honor acting stalwart, Shatrughan Sinha with the prestigious ‘Outstanding Contribution to Indian cinema’ honour this year.
The audience at Raymond James Stadium will witness the original ‘Shotgun’ receiving a standing ovation for his illustrious career in the Hindi film industry spanning over 45 years.
Over the years, the veteran superstar has earned immense fame for his iconic performances cementing his status as one of the legendary actors of our time. Sinha’s impressive track record boasts of a series of blockbuster hits including Kaala Patthar, Shaan, Naseeb, Kalicharan, Dostana, Mere Apne Aa Gale Lag Jaa and Aan: Men At Work, to name a few. Having fearlessly essayed both positive and negative characters in his on-screen roles, Sinha is best remembered for his unconventional yet highly intense and passionate monologues and unique style of dialogue delivery which continues to strike a chord with audiences even today…especially when he says “Khamosh!”
Speaking on the award, Shatrughan Sinha said, “It has truly been a long but fulfilling journey in the movie business and I thank IIFA for commemorating my eventful career with this prestigious award. The honour not only humbles me, but makes me feel loved by a country where cinema is the ultimate equalizer of the masses.”
In previous years, IIFA has acknowledged many Indian cinema legends including the late Director-Producer Yash Chopra, lyricist Javed Akthar, filmmaker Ramesh Sippy and songstress, Asha Bhosle among others. Acknowledged for applauding the work of renowned actors and directors on a global platform, IIFA will felicitate Shatrugan Sinha in Tampa Bay, Florida this year. The 15th IIFA Weekend and Awards will be held from the 23rd to the 26th of April.

Bipasha Basu Has No Plans For Marriage