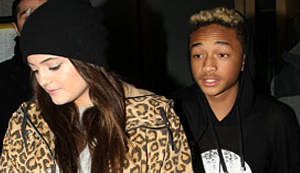 The 15-year-old reality TV star Kylie Jenner was spotted grabbing sushi at Nobu in London with the ‘Karate Kid’ actor over the weekend and friends have revealed they have recently started a relationship after being friends for some time.
We can’t imagine either date would have been that romantic, given the pair were chaperoned by Jaden Smith‘s famous father Will Smith, but sources told the Daily Mail they spotted Kylie and Jaden kissing during their dinner date at Sophie’s Steak House in Covent Garden on March 1.
A source close to the couple told us: ”They’re dating. It’s new, but they’ve been friends forever.”

Rita Ora Avoids Hotel Charges And Sleeps On The Beach