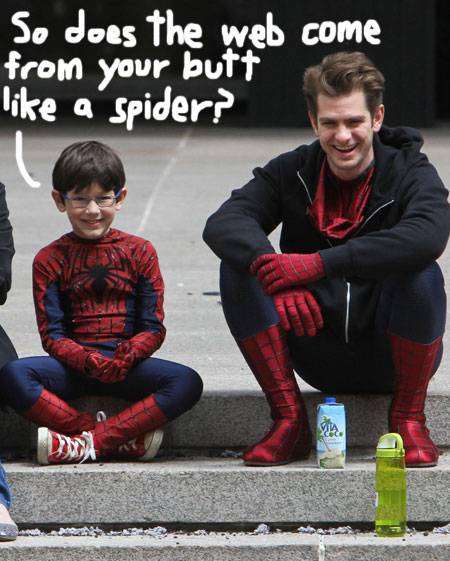 Actor Andrew Garfield was left searching for excuses when he visited a children’s charity dressed a Spider-Man this week as he was confronted by a group of kids who dared him to show off his superpowers.
The Brit plays Peter Parker and his web-slinging alter-ego in The Amazing Spider-Man franchise and he donned the iconic red and blue costume for a charity trip on Wednesday.
Garfield was visiting the Kids’ City organization in south London but had to think on his feet when some of the youngsters, aged three to 11, confronted him about Spider-Man’s special powers.
The actor tells U.K. talk show host Graham Norton, “At the start these inner city kids were like, ‘Why don’t you climb the God d**n wall? Get up that wall and be Spiderman!’ I said, ‘There are no bad guys are around so I can’t use my powers irresponsibly,’ and they eventually let up!”