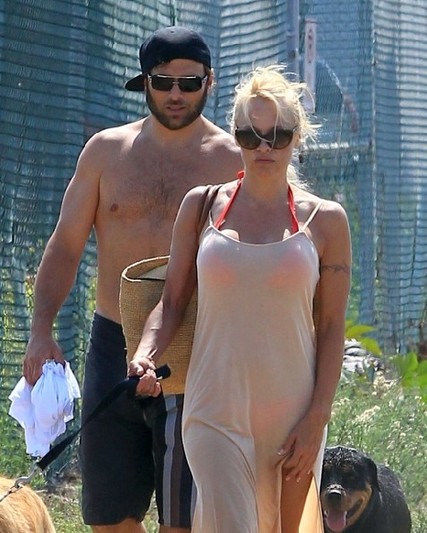 It might be 2014, but it feels more like 2007 now that Pamela Anderson has re-married ex-husband Rick Salomon. They were hitched for a whole two months seven years ago and are now giving married life another shot.
Anderson confirmed their nuptials this weekend at Sean Penn’s Help Haiti Gala in Los Angeles Saturday and showed off her big rock too. The blonde star said on the red carpet (via E! News): “We’re very happy. Our families are very happy and that’s all that matters.”
So far, no word on when and where they tied the knot. In fact, no one even knows if they were ever engaged. The former Baywatch star only revealed that they were dating again back in October — after she was spotted frolicking topless with him at a beach in France. At the time, Anderson described their relationship as “best friends…with benefits” on Ellen DeGeneres’ show.
This is the fourth marriage for both, meaning they both have married two other people. Salomon was married to voice actress Elizabeth Daily from 1995 to 2000, then tied the knot with actress Shannen Doherty for seven months around 2003 before getting an annullment. (He didn’t marry her, but he was the star in the infamous Paris Hilton sex tape.)
Anderson was famously married to Tommy Lee after knowing him for a whopping four days. They split in 2001 but tried to make things work again in 2008 (and a lot of time in between). Then she married Kid Rock in a white string bikini in 2006. They lasted 122 days of wedded bliss.
Best of luck to the happy couple!